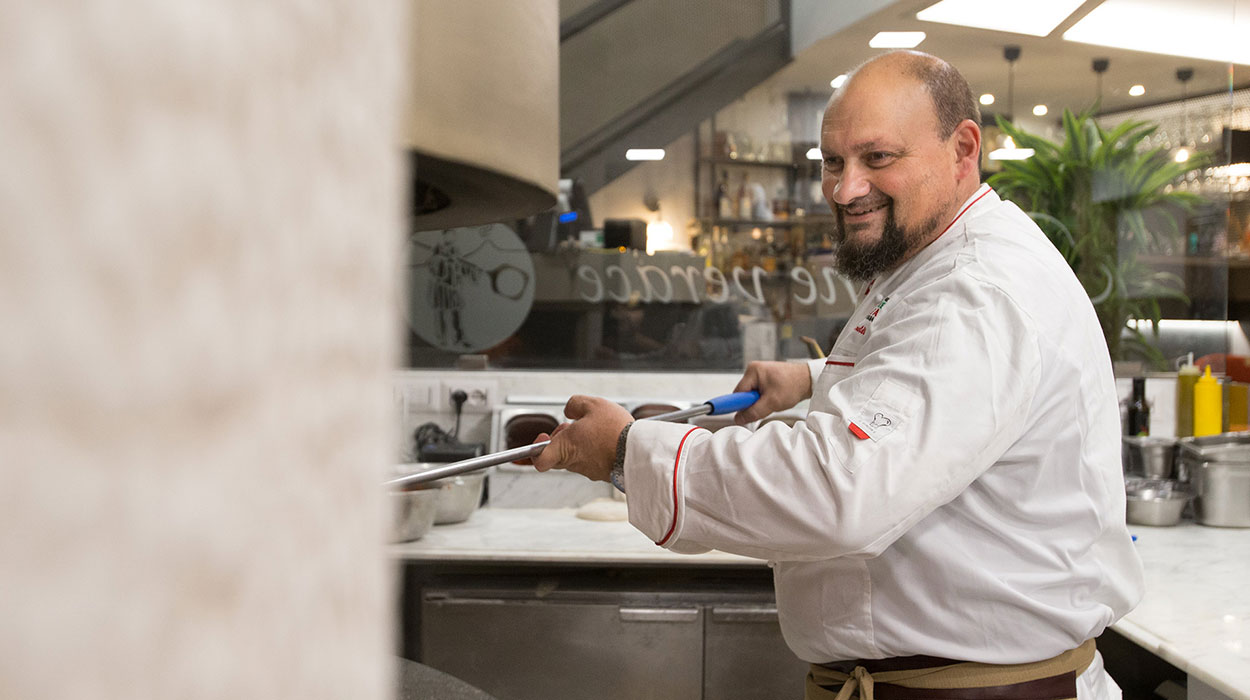 Salvatore de Rinaldi, known as Sasà, was born in Naples in 1970 and at the age of 13 he started working at the "Ristorante Pizzeria Stella", the family restaurant, where he became passionate about the handling of dough.

In 1989 the brand "Sasà Pizza Mia" was born and over the years the culinary research has led Salvatore to be employed in several restaurants throughout Italy, which enriches his training. He is also supported by his wife Rosa, with whom he shares an idea of an innovative restaurant, with a family character, but with a high level of quality.

In 1995 he decided to accept the assignment in a restaurant in La Thuile in Valle d'Aosta, which was the first restaurant affiliated to the AVPN (True Neapolitan Pizza Association) of the city. However, the real turning point came in 1998, when in La Thuile the first Salvatore de Rinaldi’s restaurant, "La Fordze", was born. It combined the tradition of Neapolitan cuisine with the local one, the restaurant receives the AVPN plate n. 147.

In those years Salvatore experiments to create a multi-grain dough, personally selecting different types of cereals and also this time the commitment is rewarded by numerous awards won in local and national gastronomic events.

The Valle d'Aosta gives Salvatore the great culinary experience of northern Italy as the ability in meat processing, but also the great love for craft beers of which he becomes a great connoisseur, creating years after, together with his son Cristiano, the IPA ZONE beer, winner of several prizes.

In 2005 Salvatore and his wife Rosa decided to return to Naples and open the restaurant pizzeria "La Taverna di Bacco" in Rione Alto, which immediately achieved great success and became a reference point for the whole area and the city of Naples thanks to the high level kitchen that combines the Nordic influence to the Neapolitan tradition.

The following years were very successful and Salvatore can devote himself even more to the many commitments of the AVPN, of which he is teacher in training courses for young pizza makers and consultant for important pizzerias all over the world.

In 2014, after the enormous success during a local event "the white night", Salvatore received a medal for the worthy commitment of the Municipality of Vomero-Arenella; in the same year B-Zone opens, right next to the restaurant, a place to taste craft beers, run by his son Cristiano.

Also in 2014 the book "When the kitchen becomes poetry" is published, written by Salvatore de Rinaldi with Vincenzo Trematerra and Vincenzo Russo, published by Grafica Elettronica Editore.

In 2016 he began a collaboration with the “Molini Bongiovanni” Company, through which he can continue to explore the world of stone-ground flour for high-hydration dough.

In 2017, after the renovation of the restaurant, he presents de Rinaldi, a place that combines the wisdom of the Italian culinary tradition, the world of Neapolitan Pizza, including also pizzas made with special dough and the burgers by Cristiano. Salvatore and Rosa's dream of having a family-run restaurant, able to offer high quality dishes thanks to the ingredients selected among the ones indicated by Slow Food organization and provided by the best national suppliers, finds its definitive form in de Rinaldi.